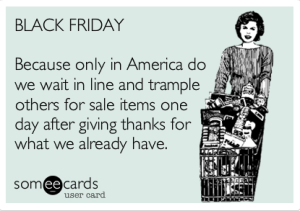 For decades, Black Friday has been known as the official start to the holiday buying season, but this year, “Gray Thursday,” also known as Thanksgiving, has caused a lot of controversy. Eager shoppers around the nation skipped out on turkey dinners to score low prices on TVs, tablets and other goods at many chain retailers looking to boost the bottom line, such as WalMart, Kohl’s, K-Mart, Best Buy, JC Penney, Sears, Macy’s, Staples, Toys R’Us and Target.

Outrageous lines and bickering shoppers are old news, but this year’s scramble to get the best deals resulted in an outpour of user-generated videos, images and tweets hashtagged #WalMartFights. Content depicts people swarming the shelves, pushing and shoving and some even show people getting arrested. BuzzFeed catches some of the madness in this post and PRNewser called the hashtag incident a PR Nightmare for WalMart.

Forbe’s reports a record-breaking day of sales on Thanksgiving with more than 10 million cash register transactions between 6am and 10pm, a victory for the company financially, but hardly a success for the employees who missed out on family time to wrangle crowds and the shoppers who were victims of violence during the shopping event. However, WalMart’s response to the violence and chaos during Thanksgiving and Black Friday hardly assumed responsibility or even acknowledged what had happened.